We took a night flight on board Cathay Pacific and after a short stopover at Hong Kong, we flew to Incheon International Airport, Seoul. From there, we had to take the subway for about five stops to Gimpo International Airport where we would take a domestic flight via Korean Air to Jeju.

However, we had a lot of time to kill before our domestic flight, so we used the time to run some errands and of course, eat. 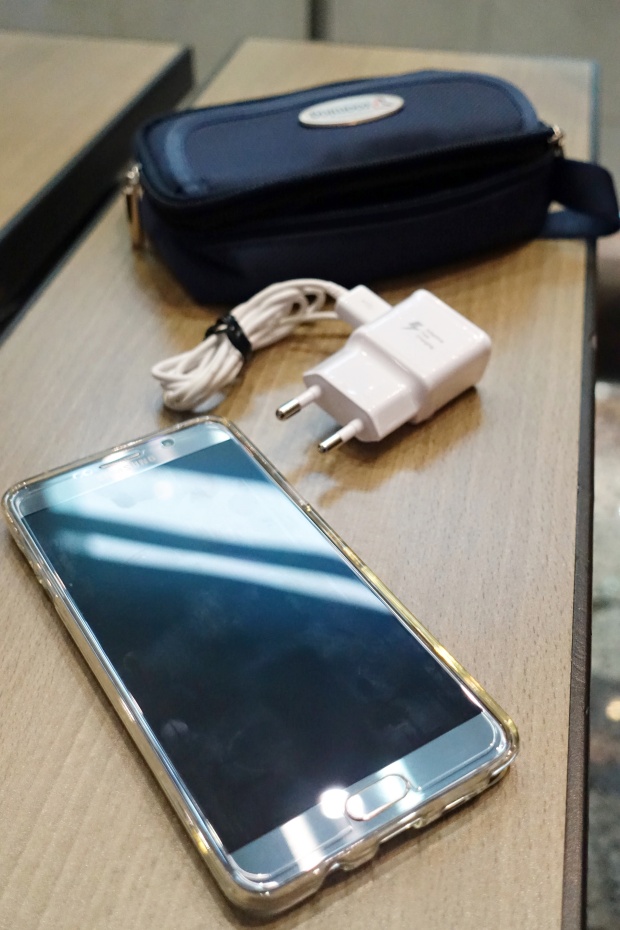 The first thing we did after clearing the customs was to collect our Samsung Galaxy Note 5s from SK Telecom, located between Exits 10 and 11 at Incheon International Airport. We participated in the 10th event of Enjoy Mobile Korea Programme by the Korean Tourism Organisation, Samsung Electronics and SK Telecom, where 250 winners are selected each week for a free rental of the latest smartphone. This means FREE VOICE AND DATA services for five whole days! This weekly programme will continue till the end of the year! 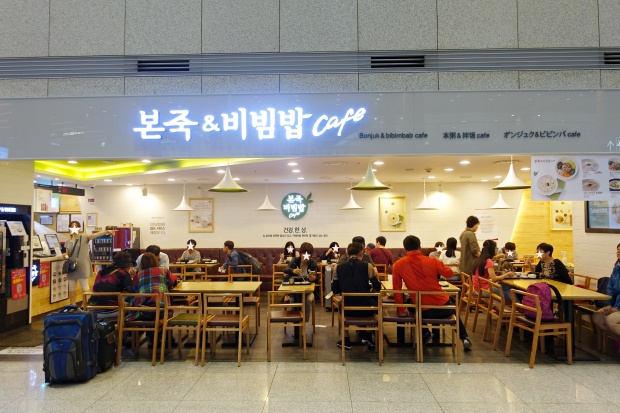 Following that, we grabbed some breakfast from Bonjuk & Bibimbab Cafe, which specialises in congee/ porridge and bibimbab. I ordered the Beef Vegetable Porridge (8,500Won = SGD$10.20) and while I found the porridge healthy, it was lacking in taste. 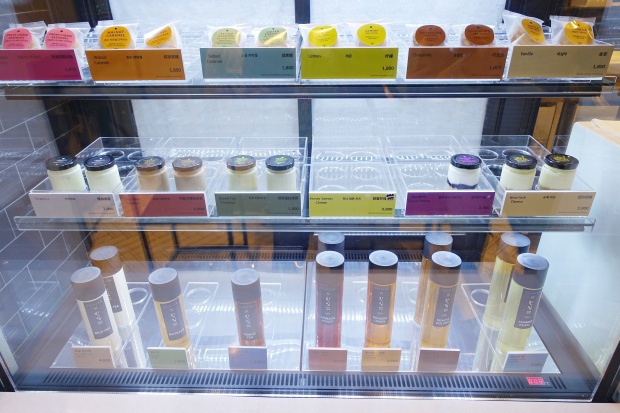 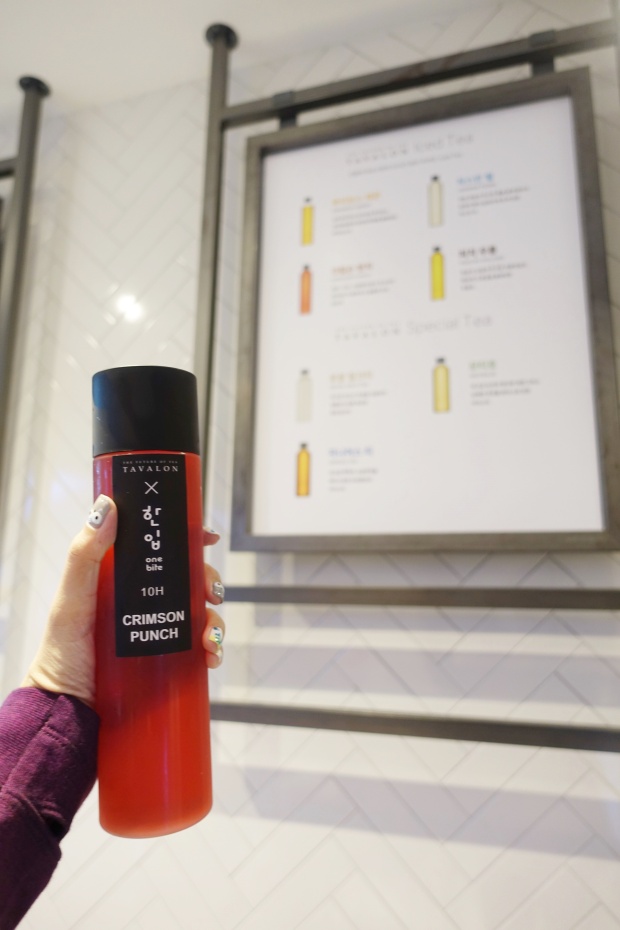 Feeling not very satisfied, we walked over to One Bite, a pop-up cafe. Over there, we had coffee, some rusks and Tavalon one-of-a-kind Crimson Punch tea. All for just 6,500Won (SGD$7.80)! I admit that the rusk was not as hard or dry as it should be, but overall the experience at One Bite was positive.

We chose the Citypass+ over T-Money (another public transport discount card) because it came with a coupon book for attractions in Seoul. Other than that, both cards cost 3,000Won (SGD$3.60) and offer similar discounts. 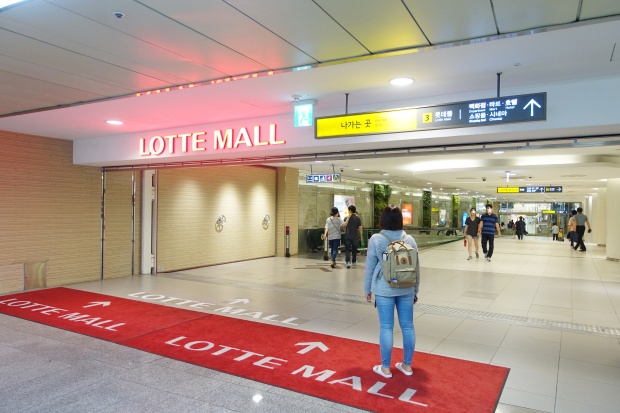 Seeing that we still had time left over before the flight, sis and I headed to Lotte Mall, which is located opposite the airport.

Sis found these super cute Spongebob Squarepants donuts from Krispy Kreme! They were going for 1,800Won (SGD$2.20) each. I did not get the Patrick one as it did not look very special, but the Squidward (chocolate flavour) and Spongebob (banana flavour) were just too irresistible. 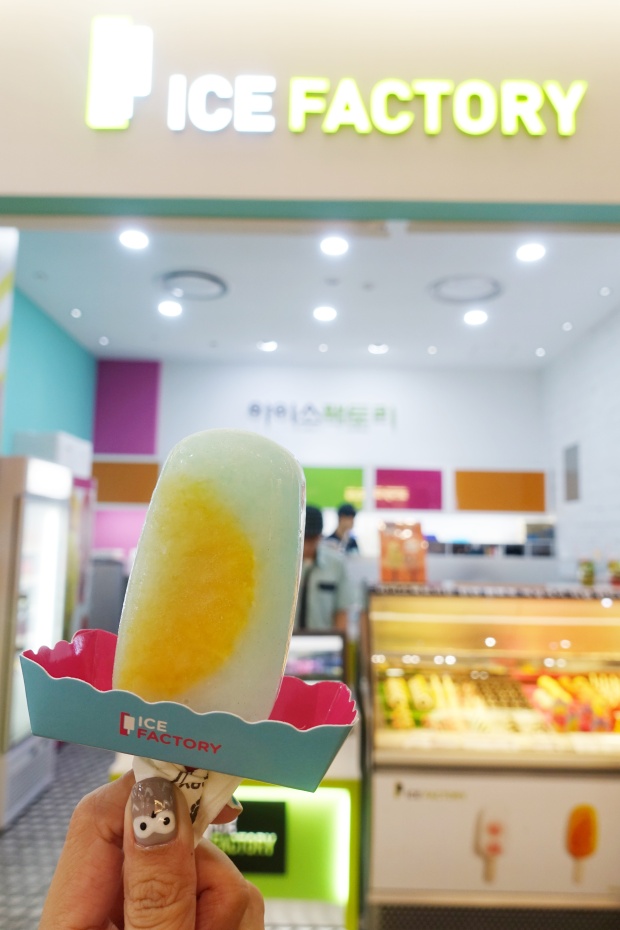 We also came across Ice Factory, which sells the cutest ice pops! It was really hard for me to decide on a flavour or design, because they had everything from worms to paw print designs and interesting flavours like this Orange Lemon (3,200Won = SGD$3.80) one. 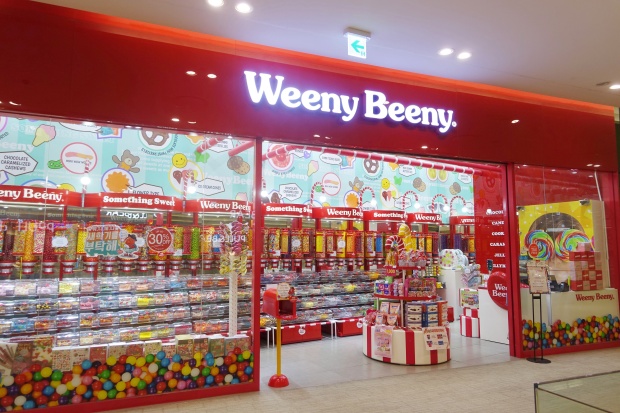 Finally, we got on our flight and reached Jeju, where we collected our rental car from Sixt. The car rental company was located quite far away from the airport. Thankfully, they provided a free shuttle.

They gave us a free car upgrade!

We loaded our luggage and drove to Mysterious Road, where a seemingly downhill slope will cause things to move uphill. It was so cool! We left our car on Neutral and instead of going backwards, it moved forward! 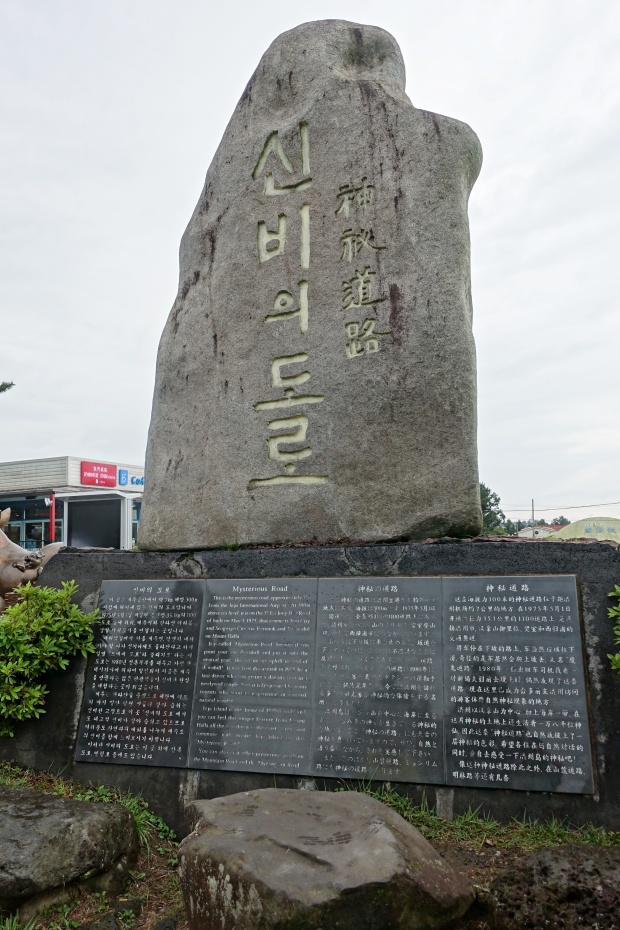 You can see cars slowing down and switching to Neutral along this stretch of road. Apparently it is an optical illusion caused by the scenery on both sides of the road, but nevertheless it is still cool! 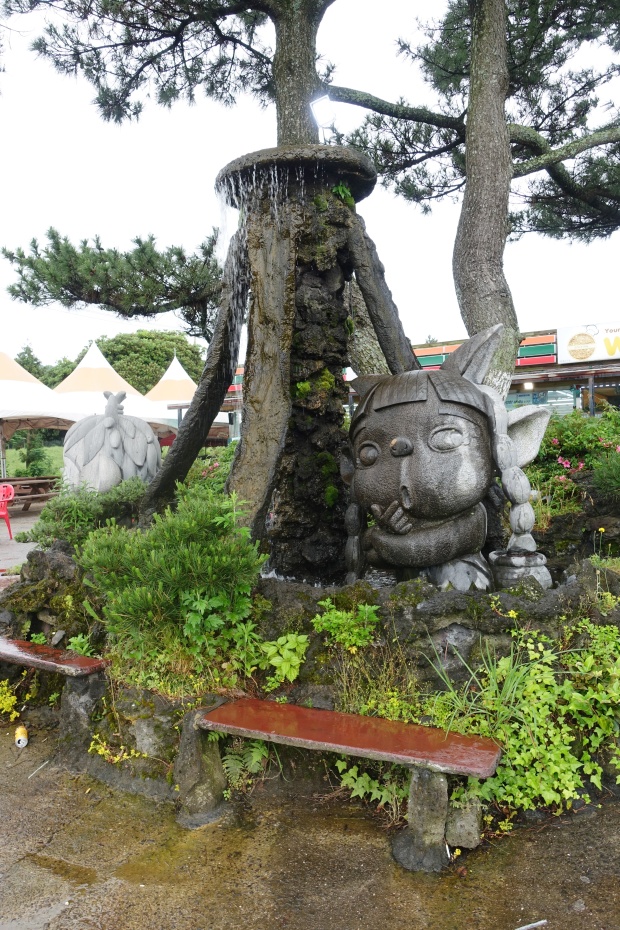 At the said road, you can find this Walnut Pie shop, which has been producing delicious homemade nut pies since 1998. They specialise in walnut, macadamia and pecan, but of course we had to try their namesake. A medium sized pie goes for 5,000Won (SGD$6). 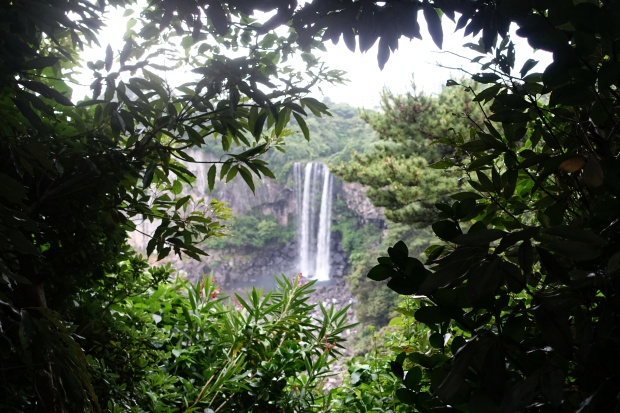 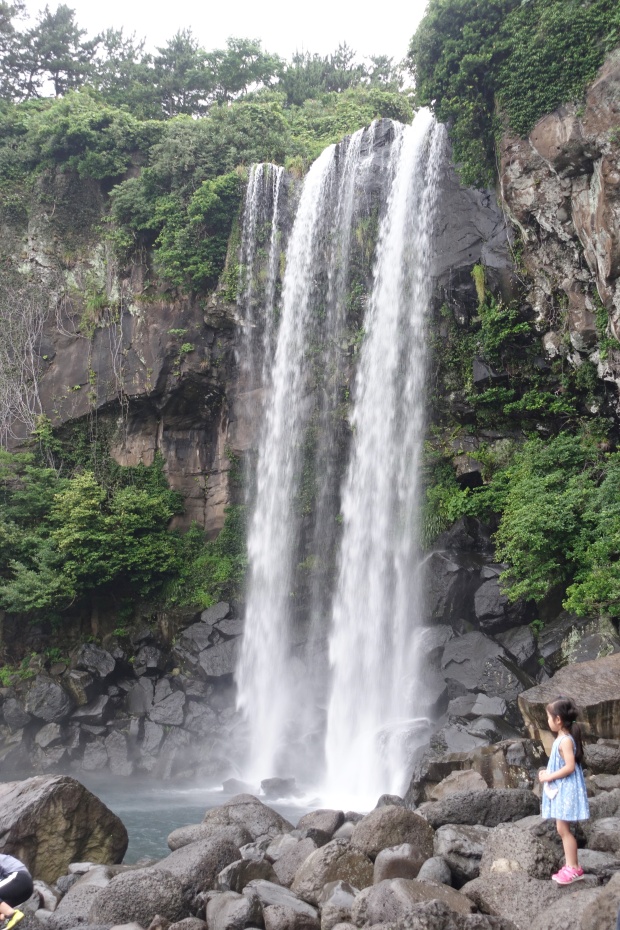 Before heading to our hotel, we had one last stop for the day, which was Jeongbang Waterfall (2,000Won = SGD$2.40). The ticket counter closes at 6.15pm, and we arrived just on time. The waterfall is 23m high and 10m wide. It is also one of the 10 scenic wonders of Jeju Island.

We then checked into Vistacay World Cup Hotel. It is a relatively new hotel and a stone’s throw away from Seogwipo Intercity Bus Terminal as well as Jeju World Cup Stadium. 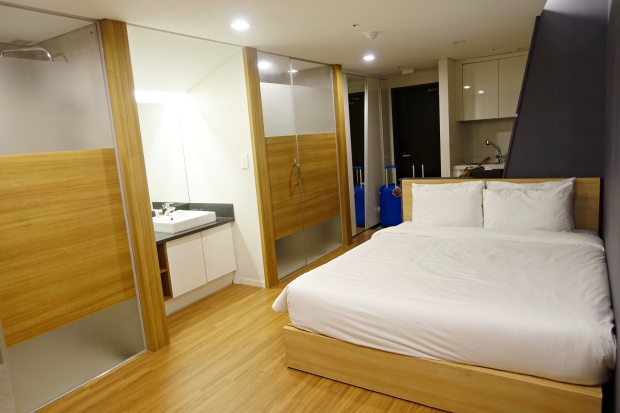 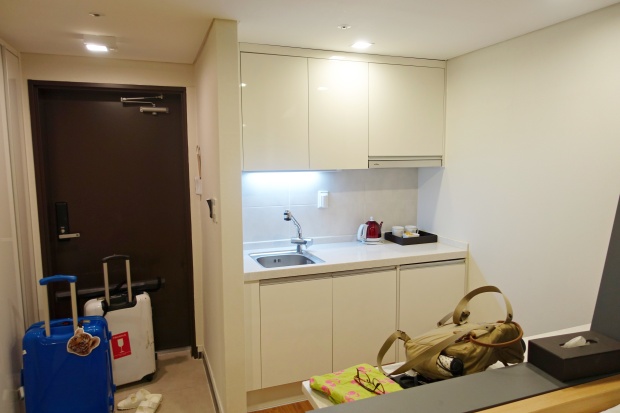 We washed up and headed for dinner. Sis found Hae Un Dae Garden, a Korean BBQ restaurant nearby which has very high ratings and free parking. 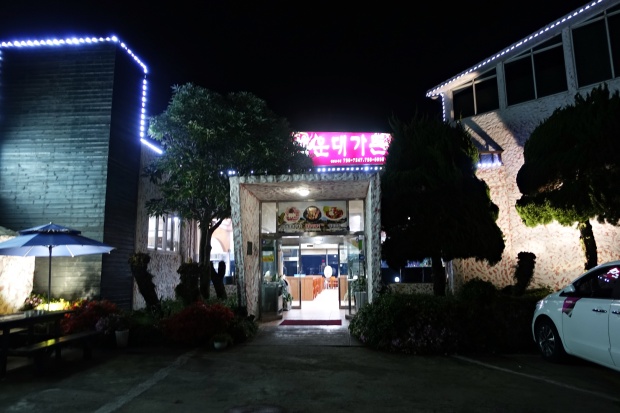 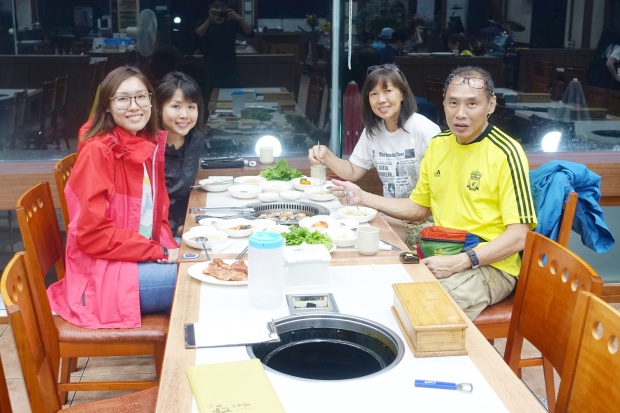 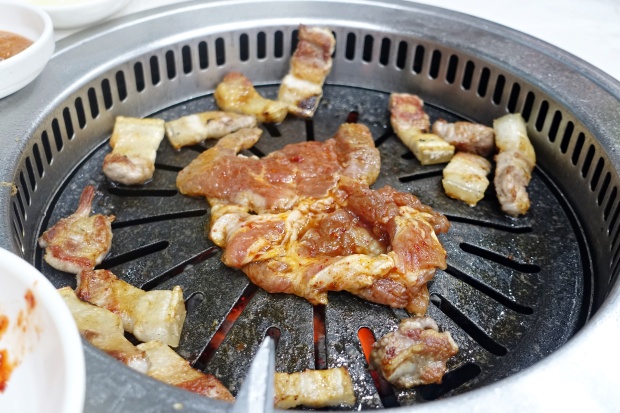